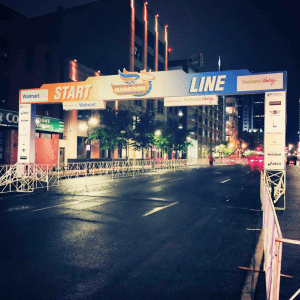 The 2015 Kentucky Derby Festival (KDF) miniMarathon was my second KDF and fifth half-marathon distance race. This race was my first as a @BibRave #bibravepro, although the entry fees were paid 100% in full by me.

On the first Saturday in May, Louisville, Kentucky hosts the Kentucky Derby. The Derby is commonly referred to as the “fastest two minutes in sports”. If you love Thoroughbred racing, the Derby is something that should be on your bucket list. If you love racing and horses, the KDF mini/Marathon is definitely for you. The two to three weeks leading up to the Kentucky Derby is a huge party that encompasses Louisville, the Kentucky Derby Festival. Throughout the KDF, events such as Thunder Over Louisville (North America’s largest fireworks show), Great Steamboat Race, Fest-A-Ville, and of course the KDF mini/Marathon. 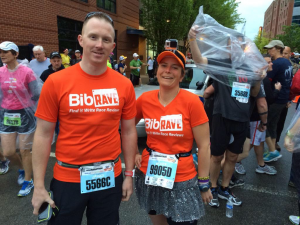 Overall: This is an excellent race. Although this was only my second KDF mini, it is one of my favorite. The environment is full of excitement and mixed between half and full distance runners through eight corrals based on estimated finish time. The relatively flat course carries you through Downtown Louisville to legendary Churchill Downs, home of the Kentucky Derby since 1875, and back to the finish line beside Louisville Slugger Field (home of the Triple A affiliate to the Cincinnati Reds).

T-Shirts/Swag:Swag is a definite perk to this race as a high quality Asics tech shirt is provided (separate styles for 13.1 and 26.2 runners). Additionally, runners receive a finisher’s medal and virtual goodie bag with discounts to other races, gear, and products. 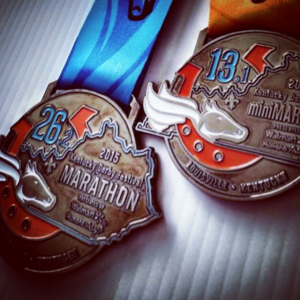 Aid Stations: The course is made up of eight water stations and six Powerade stops. Throughout the course volunteers seemed ample along with the supplies. I finished in 2 hours so I cannot speak for the runners/walkers who hit the three plus hour mark on either the mini or the Marathon. Cliff Bar products were distributed at mile 9, but I cannot confirm which product as I did not stop.

Scenery: The course scenery is very urban. The event starts in Downtown Louisville next to the Louisville Bats’ (Cincinnati Reds Triple-A affiliate) home site at Louisville Slugger Field. As runners head west they pass the KFC Yum! Center where the University of Louisville Cardinals play their home basketball games and continue towards the Louisville Slugger Museum before heading into west Louisville. Winding through the Downtown district, runners will pass the old Union Station, US Federal Building, and countless historical sites before turning into Central Park and the St. James Square District. As runners continue south towards legendary Churchill Downs, they are exposed to century old homes that line both sides of the streets, many of which have been restored to their original luster. While moving towards Churchill Downs runners must pass the University of Louisville Campus. Once on Central Avenue runners can see Churchill Downs where they enter the main gate and proceed down the tunnels under the race track and into the infield (Tip: There are permanent restrooms available in the restroom in large quantities) and circle around as Derby horses are on the track performing workouts of their own. After exiting the Downs the marathoners and mini runners split with the mini runners taking a left and marathoners going right. Some lucky guy repeatedly announces this into a bullhorn the entire time. Now heading back Downtown runners see the true side of the University of Louisville Campus including Papa John’s Cardinal Stadium (football), Patterson Stadium (baseball) Speed School of Engineering, and the main campus including Greek Row. The urban environment continues to grow as the runners take third street back to Main before turning right and heading for Preston Street and a 10th of a mile sprint to the Finish Line.

Expo: The Expo and Packet-Pickup is currently at the Kentucky International Convention Center (KICC) at 3rd and Market. The KICC is closing in 2016 for a two year complete remodel so it may not house the Expo in 2016 and 2017. Packet pickup is well marked with signs throughout the venue and large enough to accommodate  the people. After entering the Expo, runners are able to search on computers their name to find bib numbers. Marathoners and mini runners are separate by bib numbers with plenty of volunteers to assist. Once a bib packet has been picked up, you can proceed to the t-shirt pickup, one table for women one for men. The mini and marathon have separate shirts that reflect their unique distances. Other Ky Derby Festival events are throughout this area as well. Once runners have picked their packet up they enter the sales area that includes a large Asics area with customized KDF apparel. After that, a large mixture of products, races, gear, and other items are in a maze that allows you to pass through in 2 minutes or 20 depending on your needs.

Elevation: This course is relatively flat (unlike the Marathon) as the steepest grades are entering and exiting tunnels and viaducts. Great course for a PR in the mini.

Parking/Access: Parking is everywhere ranging from meters to lots and garages. The average price is $5-10 to park in a lot or garage. Meters are free on Saturday’s until 10AM but are heavily enforced aftet 10. There is an app that allows you to pay for parking by the hour.

Race Management: This race is one of the best managed races I have been fortunate to participate in. The experience is clear in the details leading up to race day and also as you cross the finish line. The worst part this year was the heavy crowding in the Runners Unite area, but that was due to people crowding under the overpasses to shelter from the rain, not much the managers could do to stop that.

Closing: This race has it all, mylar blankets, stylish medals, bananas, peanut butter crackers, bagels, milk (chocolate too), and Powerade. The amount of effort put into this race makes it a great race for runners. Although only my second KDF mini, it is definitely my favorite race. This year I was able to PR in this event and shaved 13 minutes off of my 2014 performance (if you can call it that). I would definitely recommend this race to anyone. Remember, the full is a Boston Qualifier.