Well, it is that time of the year. The 2015 Louisville Triple Crown of Running (LTCOR) has kicked off. On March 7, nearly 7,000 runners took to the streets of Downtown Louisville to embark on a 5K journey with the @Anthem5k. Each year, the  LTCOR starts a march towards the Kentucky Derby Festival. The journey is comprised of the Anthem 5K, Rhodes City 10K, and the Papa John’s 10 Miler. This is my second entry into the Triple Crown and hoping to be full of improvements from last year. The best thing about the Triple Crown is the fundraising it does for the WHAS11 Crusade for Children, a 65 year old Louisville charity that benefits children with needs. Check out www.crusadeforchildren.org for more information.

The Anthem 5K Fitness Classic is the first leg of the Triple Crown and ran a new course this year through Downtown Louisville. The chilling 20 degree weather was a drastic heat wave over the -15 degree temps felts the previous morning. On Wednesday, a near record breaking 13″ of snow fell on Louisville. Surprisingly, most of the snow was melted away before the first runner crossed the starting line. 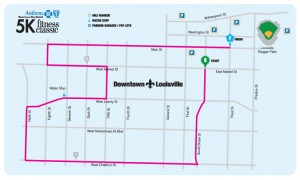 The 2015 Anthem 5K was sponsored by Anthem Blue Cross & Blue Shield, and countless others, including Chick-fil-a, Fleetfeet, and PowerBar.

On March 21 the Rhodes City 10K will take place followed by the Papa John’s 10 Miler on April 4. Stay tuned for recaps of each.