The 2014 Louisville Triple Crown of Running’s Anthem 5K was an interesting event. This was my first attempt at a LTCOR event but was not impressed about the experience. First, let me preface the remaining of this post with, due to major road construction in Downtown Louisville (The Ohio River Bridges Project), the location and course for this event had to be changed. The location was in the business park that hosts Anthem’s Louisville headquarters. The area was nice, in a nicer part of town, but it was not designed for that many people. There was over an hour wait from the beginning of the off ramp to the nearest parking lot less than 1 mile in total distance (even I run faster than that), then the parking was inadequate. The race was postponed for 40 minutes and people were still walking to the starting line when I was nearing the one mile mark. 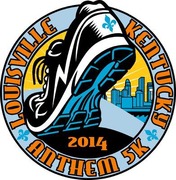 The course was tough to navigate due to the limitation of two lanes for runners. 6,000 runners on a two lane road means there is absolutely no where for anyone to go. They did their best for what they had to deal with in my opinion. However, the drive out was worse than the one in. No traffic control, just a free for all that resulted in almost two hours in traffic.

My time was no wear near my PR, but I settled for my 30:10 completion after two months of zero running recovering from my November 2013 knee injury in the Louisville Sports Commission Half Marathon (read about that here).

Overall, this was most likely a fluke and I will run this event again…if it is in a new location.

To see my #bibrave review of this race, click here.